HISTORY OF THE MILL STREET BRIDGE
After digging the nearly 5,500 foot Little Chute Canal in the mid-1850s, the US Army Corps of Engineers required “island” access to operate the Dam and second lock.  An early photo at the foot of Mill Street, the location of the Zeeland Mills, shows simple planks at the canal crossing. 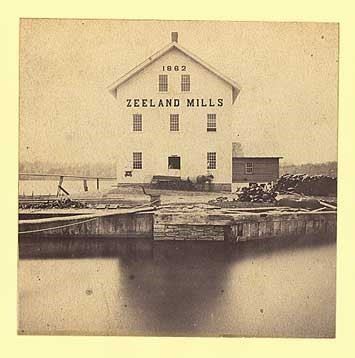 A more substantial pedestrian bridge was in place by the early 20th c. In 1928, Outagamie County decided to construct a bridge suitable for vehicular traffic and a Strauss-trunnion, overhead-counterweight, highway Bascule Bridge was built at the crossing. 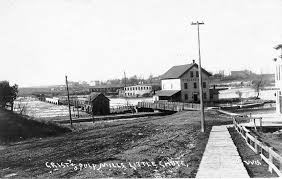 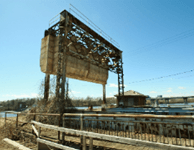 Little Chute’s Mill Street Bridge was designed by the Strauss Engineering Corporation of Chicago, with support from the Menasha engineering firm of McMahon and Charlesworth. Joseph Strauss was an innovative bridge engineer, well-known for improving trunnion lift systems in bascule bridges. By installing the counterweight at the extreme end of the bascule leaf, the leverage required to lift the deck was minimized so a lighter counterweight could be used. Strauss’ trunnion bridges with distinctive parallelogram-linked counterweights, were used widely across the country in the early 20th century and the Mill Street Bridge remained Wisconsin’s only surviving example for many years.

After the Corps closed the canal in the mid-1980s, there was no reason to maintain the bridge’s lift function, and eventually components rusted and it became inoperable. Although it was recommended as eligible for the National Register in 1996, by 2006 it was determined “structurally deficient and functionally obsolete.” Plans to reopen the Little Chute Canal required that an operable bridge be in place, but repairs were considered too costly. Design and planning were underway to replace the bridge in 2010. When it was demolished in 2015, careful thought had been given to what would take its place. 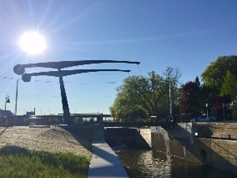 The Village worked closely with the community and engineers to design a replacement bridge similar to modern lift bridges in Holland, a nod to Little Chute’s cultural heritage. Utilizing counterweights on a lifting arm above the deck, the new pedestrian lift bridge also evokes its predecessor but in a modern streamline form.

The single leaf movable bridge was honored with a 2016 award from the National Council of Structural Engineers Associations (NCSEA) in the “New Bridges or Transportation Structures” category. Recognized for its one-of-a-kind design, the “new Little Chute Canal Bridge creates a gateway to Island Park, while permanently reopening the historic Little Chute Lock to marine navigation.”